Hazeleger Kaas recently automated a packaging line with a case packer from BluePrint Automation (BPA). The machine fully automatically packs cheese trays both horizontally and vertically in various boxes and crates. The line processes about twenty recipes which requires a flexible and quickly changeable case packer.

This year Hazeleger Kaas from Barneveld is celebrating 100 years in cheese processing. The company, founded in 1922, has developed into one of the largest Dutch service providers in the cheese industry.  Hazeleger packs A-brand cheese in all kinds of consumer packages and it supplies cheese to the hospitality industry.

Four years ago, Hazeleger made a split in the production by processing the large batches in a new building. 'With the new building we are ready for the future,' says technical manager Herwin Hazeleger (no relation to the founder). Here we have efficient production lines for large volumes that produce according to the highest hygiene requirements. Every year we pack millions of kilos of cheese. 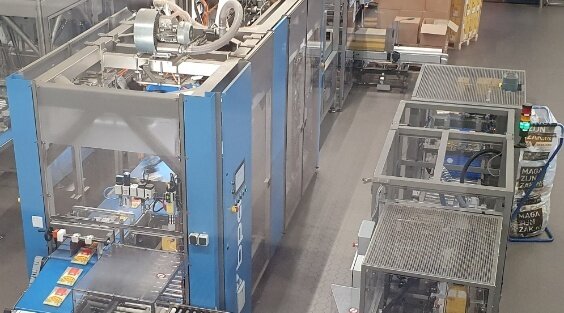 From blocks to slices

In the warehouse are large racks full of rectangular pieces of cheese of about 15 kg each. Hazeleger processes these factory cheeses into slices of cheese. The production starts with operators who put the blocks of cheese on the supply belt towards the cutting machine. This machine cuts the cheese blocks into portions of the right weight after which a deep-drawing machine packs the cheese slices into plastic trays. Next, the trays go via a conveyor belt to the packaging department where they are labeled and packed in boxes or crates.

There are currently five cheese processing lines in the new factory. The final packaging takes place both automatically and manually. To produce faster and more efficiently, Hazeleger first automated three years ago with a Gantry 100 case packer from BluePrint Automation to pack trays into different box sizes.

Late last year, the cheese processor began looking for a final packaging solution for a more complex line that processes twenty different varieties. 'The diversity of end packages makes it complex,' says Herwin Hazeleger. 'The trays go into crates, different box sizes and are packed both horizontally and vertically in different pack patterns. We were therefore looking for a flexible and quickly changeable case packer. In addition, we have limited space, so the machine also had to be compact. After a market survey, the Spider 300 from BluePrint Automation turned out to be the best solution.'

The four-axis delta robot in the Spider 300 case packer picks up the cheese trays from the infeed conveyor at high speed and places them on a parallel conveyor in pre-programmed patterns. Then a two-axis gantry robot picks up the formation and places them in a crate or box. Full crates and boxes are transported a a discharge conveyor, through a box sealer (if packed in box) ando an operator who palletizes them. For small boxes, a buffer system has been developed that creates twice the buffer time so that the operator has more time.

With a maximum capacity of 100 trays per minute and 17 boxes per minute, the machine is faster than three packers who used to manually place the trays in the boxes. Only one operator is now needed to operate the packing line. 'The machine is available in a number of variants with capacities up to 200 products per minute,' says Hans Verhoeff, sales manager BPA. 'There are several of these Spider 300 solutions in operation. In addition to the cheese industry, the confectionery, coffee, potato and bakery industries are also benefiting from the Spider 300. Besides the flexibility, the simple and quick changeover is important. The changeover parts in the other variants are minimal so that companies are easily prepared for the future.'

For trays that are packed vertically in an SRP box, BPA has developed a cassette system. The delta robot places a predetermined number of trays on top of each other on the conveyor belt. The belt then rapidly rotates the stack of trays in the cassette, which places them in the box. 'To prevent the cheese slices from sliding down or damaging the packaging, the trays must not fall into the box from too great height,' says Verhoeff. 'The cassette lowers them into the box just a few inches from the bottom. This can be done in a single or double row and within different box sizes.'

Looking back on the project, Herwin Hazeleger is very satisfied with the installation of the final packaging line. The installation went smoothly. We only had some start-up problems with a box made of solid cardboard. Together with the box and machine supplier we found a solution. Looking ahead to the future, Herwin expects to automate more lines. 'We want to optimize the factory more and more. Currently three of the five lines are automated. If we start investing again then BPA will definitely be one of the providers again.'

More customers about us

How do you develop a future-proof secondary packing concept?

Unburdened from start to finish in one packaging solution