Unburdened from start to finish in one package solution

Zandbergen World's Finest Meat, based in Zoeterwoude, is a leading company in the international protein supply chain. In addition to importing meat products, since 2018 it has increasingly focused on alternative protein solutions (read: plant-based meat).

About four years ago, Zandbergen entered into a partnership with the American company Beyond Meat, which specializes in the production of plant-based meat products such as hamburgers and sausages. The collaboration initially concerned the distribution of these products, which until then had been produced in America. At one point, Beyond Meat was looking for a production site in Europe. "We were just planning to expand our own production facilities in Zoeterwoude," says Ralph Soetens, Operations Manager at Zandbergen. "Because we had by now established a good relationship with Beyond Meat, we were able to further expand our cooperation and decided to set up the new plant completely for vegetable meat products." 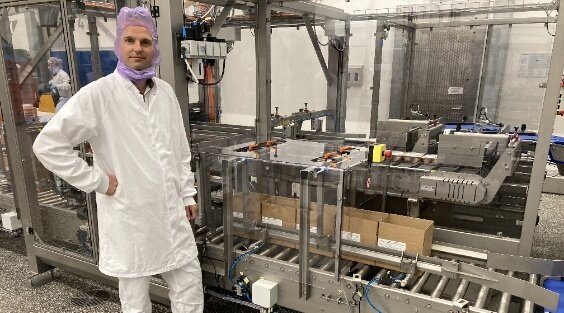 For the new location, a new (secondary) packaging solution also had to be brought in. Given the pace at which trays of Beyond Meat hamburgers and sausages would roll off the assembly line, an automated secondary casepacking process was the obvious choice. Human hands would have difficulty keeping up with the production speed. In addition, the labor market has changed considerably in recent years. Production personnel have become scarce and therefore expensive. Ralph Soetens: "In addition we wanted the best solution, not only in terms of production but also logistically. Then you start looking for answers to questions like: what size a case should have for an ideal pallet stack?"

On the advice of direct colleagues in the market, Zandbergen ended up with BPA. "Those colleagues said, 'this is right up their alley'. I got that impression the first time I visited their factory in Woerden. It looked super professional. If you only saw how neatly they worked." Zandbergen sat down with BPA to determine together what the most efficient way of packaging would be in combination with what is practically feasible by machine. The entire packaging process was examined.

The result was a more modest packaging size for the outer box than is the standard in America. Which also called for smaller trays. "The big advantage of this combination is that you need less packaging material overall and you can fit more product on a pallet. That's not only financially interesting, it also saves on the environment. You bring less waste into circulation and you can reduce your transport movements and thus your CO2 footprint. We also looked at the ideal set-up for the case packers. Initially, we thought of separate case packers for retail and food service, both for the burgers and the sausages. In the end, we opted for a more compact setup: we focus on retail and make a bypass for food service."

Ralph Soetens looks back on a pleasant cooperation with BPA. In the development phase of a new plant, plans and insights can still change. "BPA didn't let this throw them off balance. They understood how such processes can run and continued to think creatively and flexibly with us."

The most important effect of the new line is that it has brought calm to the packing hall. With manual packing before this, there were a lot of people on the floor. Now a machine does the work. The trays are placed in cases as well as crates according to the requirements in the various markets. Ralph Soetens: "Such a breakdown testifies to the technical know-how of BPA. The line is robust and very user-friendly. We hardly need to adjust it. And if we need to, it's a snap. From start to finish, BPA took care of everything for us. The case packing project was delivered on time. Believe me, that's very nice when you're building a new factory and there are so many things coming at you at once."

More customers about us

How do you develop a future-proof secondary packing concept?